The rate of genetic gain in the Australian dairy herd has almost doubled in the past decade, according to a recent analysis.

DataGene announced the results with its April release of Australian Breeding Values (ABVs).

Michelle Axford, DataGene Genetic Evaluation Manager, looked at the rate of genetic gain for Balanced Performance Index (BPI) in Australian Holsteins in 5-year time blocks, based on the BPI of the sires of cows. 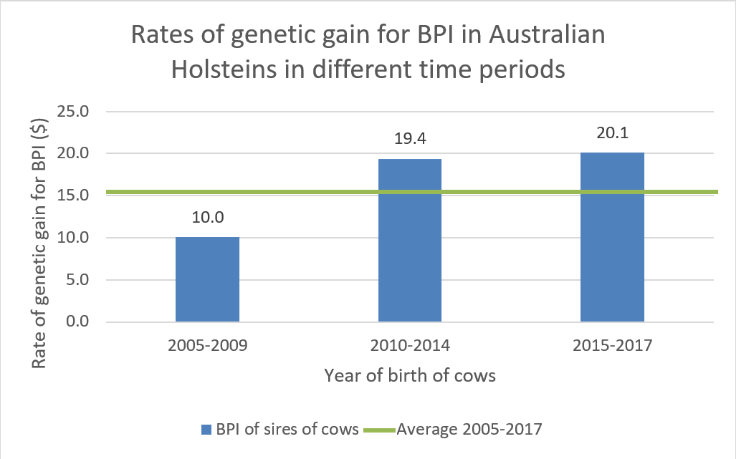 A number of initiatives are likely to have contributed to the acceleration in genetic gain, including the introduction of the Good Bulls Strategy in 2010, genomics in 2011 and dairy’s three new indices in 2015.

“The easiest thing farmers can do to improve genetic gain in their herd is to buy semen straws that carry the Good Bulls logo,” Mrs Axford said.

Bulls that carry the Good Bulls logo meet the minimum criteria for Balanced Performance Index, reliability and are available for purchase. There is a wide range of Good Bulls, giving farmers plenty of choice for Good Bulls that meet their priorities for specific traits, budget and company preferences.”

“Encouraging farmers to use a Good Bulls straw to breed every replacement has been a collective effort. Bull companies, AI service providers, farmers, researchers and industry all play important roles.

“It’s very exciting to see a jump in genetic gain in Australian dairy herds. The benefits will be long lasting because genetic improvement is permanent and compounds every year,” she said.